It is estimated that more than three million people in the United States have Barrett's esophagus, and that number is growing at an alarming rate. This condition is caused when digestive acid backs up from the stomach into the esophagus, causing damage and growth of precancerous cells. If left untreated, Barrett's esophagus can lead to esophageal cancer, an aggressive cancer that is typically fatal.

We Pioneered Radiofrequency Ablation for Treatment of Barrett’s Esophagus

As recently as a decade ago, a common treatment of Barrett’s esophagus was radical surgery in which the esophagus was removed and the stomach was shifted up to the neck. At Jefferson, we pioneered radiofrequency ablation (RFA), a procedure that restores the normal structure, color, and layered arrangement of cells within the esophagus in a majority of patients. RFA spares 80 to 90 percent of patients having their esophagus removed. RFA typically only requires four 30-minute outpatient procedures at intervals of two to four months.

How is RFA performed?

RFA is a treatment with two parts, both designed to safely removed pre-cancerous tissue from the esophagus.

First, the diameter of the esophagus is determined and a balloon-shaped catheter is inserted. Once in place, it is inflated to come in contact with the walls. Heat is then delivered through small hair-like wires wrapped around the catheter. This removes much of the pre-cancerous Barrett's tissue.

The patient then returns on 2 - 4 month intervals for an upper endoscopy.

During these visits, the thumb-sized focal catheter with the same hair-like electrodes is utilized to remove any remaining Barrett's Esophagus that persists along the esophageal wall.

After 3 to 4 procedures, the esophagus may appear normal in over 80-90 percent of the cases. The number of procedures required us directed related to the length of the Barrett’s segments in the patient.

The Barrett's Esophagus Treatment Center's multidisciplinary patient care team includes gastroenterologists, pathologists and surgeons to treat basic and complicated, precancerous cases (dysplastic Barrett's esophagus). Our physicians are supported by a registered dietitian who instructs patients on successfully maintaining a healthy diet that can mitigate the effects of reflux (heartburn) that causes their Barrett's esophagus.

Our staff also includes nurses specially trained and highly experienced in caring for patients with Barrett's esophagus alone or in conjunction with various co-morbidities.

For cases of esophageal cancer, we are joined by oncologists and radiation therapists of the Sidney Kimmel Cancer Center at Thomas Jefferson University. 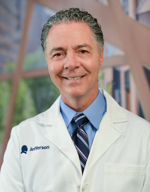